A brief history of the Royal Arsenal Canal by Ian Bull

The Royal Arsenal Canal was designed by Lt. Col. Robert Pilkington of
the Royal Engineers the building contractors being William Bough and
Hugh McIntosh. The manpower was drawn from convicts housed in hulks
moored in Woolwich Reach and French prisoners of war. The initial
cut, which was a little longer than today's 'Broadwater', was built
between 1812 and 1814. Southwards and Westwards extensions were
constructed in 1814 and 1814/16 these forming a 'loop' enclosing an
area which became known as 'Frog Island'. The canal was built for
several purposes.

The canal is actually a long, slender, dock and has was been kept in
water by means of a lock at its confluence with the Thames. Logs were
delivered to the sawmill, shot and shell loaded from a specialist
wharf at the Southerly end, and there was a considerable incoming
traffic in coal, notably from 1856 when the Arsenal's gasworks was
built immediately South of the entrance lock. Concurrently with the
gasworks a hydraulic power system was laid into the Arsenal most
probably by Sir William Armstrong. I believe that the present wrought
iron, hydraulically operated, lock gates replaced wooden versions at
that time.

In 1859 the South Eastern Railway opened a branch into the Arsenal
from Plumstead goods yard. This was an extensive system and to avoid
existing buildings it ran Northwards, East of, and parallel to the
canal. Upon approach to the Thames it turned Westwards and crossed
the canal at its narrowest point, the entrance lock, by a swing
bridge. This was a very early example of a railway using such a
structure and it was certainly hydraulically operated by 1866. The
late 19th Century saw the Arsenal's narrow gauge railway joining the
standard gauge on the bridge's deck. I believe that the current swing
bridge dates from the first decade of the 20th Century and it is
designed to allow for mixed-gauge operation.

Until 1910 the Arsenal produced Torpedoes and these were tested in
the canal. Such testing may have continued on a reduced scale after
production was transferred to Greenock, Renfrewshire. A Torpedo was
found when the canal was drained in the 1980s and it is now on
display at the Submarine Museum in Gosport.
By the end of the First World War two further railway swing bridges
had been constructed over the broader sections of the canal for
narrow-gauge trains. These appear to have fallen out of use in the
early 1920s. The end-loop of the canal, comprising its Southerly and
Westerly extensions was infilled between 1926 and 1936. New coaling
facilities were opened on the Thames in 1916, the canal thus seeing a
significant reduction reduction in coal traffic. A large warehouse
with extensive wharfage facilities was constructed immediately South
of the gasworks in the 1930s. A notable traffic would have been
explosive materials from the Waltham Abbey Royal Gunpowder Mills on
the River Lea in Middlesex.

The early 1950s, probably 1952/3, saw a major overhaul of the lock
gates requiring their removal. Whilst the lock was out of use the
opportunity was taken to comprehensively refurbish the swing bridge.
The Royal Arsenal ceased working with ammunition in the very early
1960s and it is probably at that time that the canal fell out of
navigational use. The disposal of chemical effluents in the canal had
become common-place during the 20th Century and former staff recall
frequent and vivid changes in the water's colour.

Closure of the Arsenal to manufacturing in 1967 caused the Military
area to contract and the part of the establishment containing the
canal was sold to the Greater London Council. In 1983 the GLC carried-
out substantial repairs to the lock gates, the lock chamber, and the
swing bridge. These works may have included renewal of the hydraulic
system in conjunction with the expected construction of a light
railway which would have used the bridge. The bed of the canal was
concreted and the banks reinforced with sheet steel piling at about
the same time. The abolition of the GLC in 1988 brought about the
ongoing period of abandonment during which the lock gates have
corroded severely. The swing bridge, whilst chocked off its trunnions
remains in excellent structural condition. Flood prevention works
have now seen the access to the lock chamber from the river blocked
by a concrete wall of considerable thickness. The canal has been
known as 'Broadwater' since the mid 1980s and has been dewatered for
some years.

The Peabody Group intend to carry out major repairs to the lock
chamber, the lock gates, and the swing bridge in 2019. The structures
were listed Grade II in 1990, the listing's url is below...

Londons lost river.  The military waterway that served the Woolwich Arsenal complex The Royal Arsenal canal was designed by Lietunant Colonel Pilkington and built between 1812-14, and extended again by 1816. It had a dual purpose - one was to deliver materials into the heart of the Royal Arsenal military complex and the other was to create a defence boundary to the east. It does not seem that it was intended for the repairs of military vessels, as dry docks nearby and at the Chatham naval dockyards were available for this purpose. Colonel Pilkington appears to have used the nearby Isle of Dogs canal as a design for his own canal, and it is quite likely that the military canal is in fact a smaller version of that on the Isle of Dogs.

The main traffic venturing onto the canal was from the Royal Gunpowder Mills at Waltham Abbey on the River Lea. The Gunpowder mIlls supplied the Royal Arsenal with most of its gunpowder requirements and vessels such as the Lady of the Lea were used for the trade. The Royal Arsenal Canal is sometimes known as the Pilkington canal.

The remains of a swing bridge that was built in 1876 to carry railway tracks across the canal. This is Grade 11 listed and is on English Heritage’s “at risk” list. It is in a poor state and covered with graffiti.

Torpedo testing behind your house? 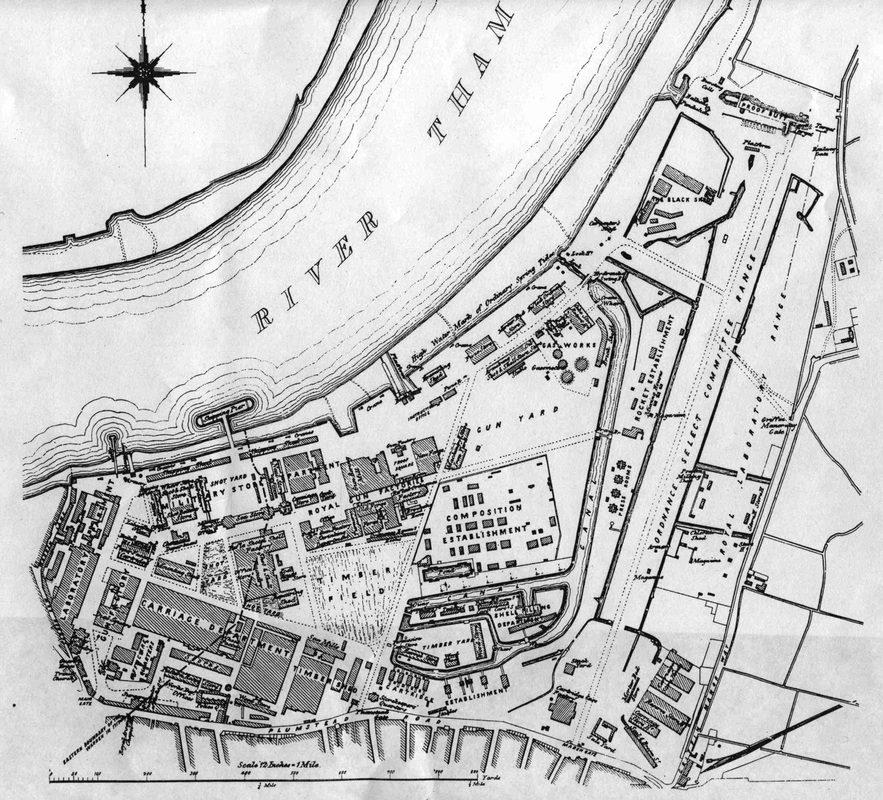