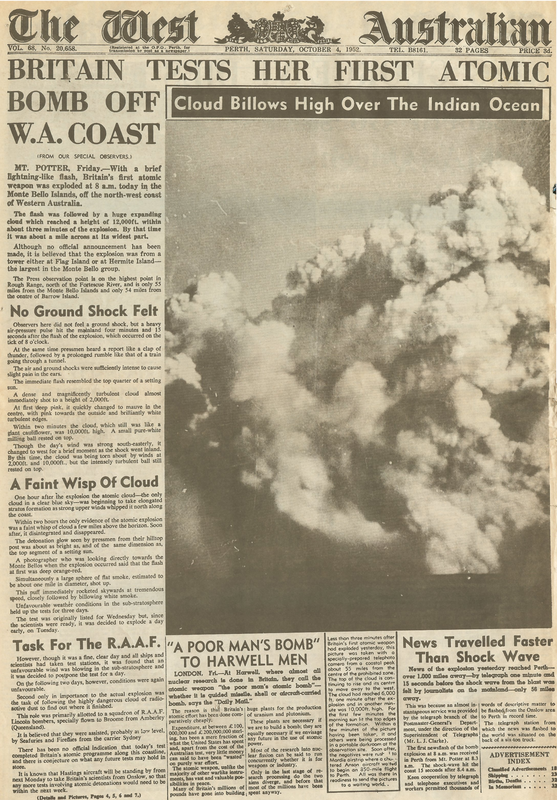 Were parts of the Arsenal involved in the project for Britain's first Atomic bomb...?

The report, outlining the features of an atomic bomb based on the U.S. Fat Man pattern, and the tasks required to develop one for Britain, was declassified and made available to the the public under the Public Records Act (now amended by the Freedom of Information Act which came into force in January 2005).

In 1947 Sir William Penny was instructed by labour Prime Minister (Clement Atlee) to design and build a British nuclear weapon.  This was in response to the USA denying access to the Atomic weapon developed jointly by the USA & UK (Manhatten project).  The Americans thought the UK was too insecure with this information probably rightly so as there were significant communist leaning members of the establishment.

The project was called Hurricane, initial work started in the Arsenal then spread to the atomic Weapons Research estabilishment on Woolwich common then to Aldermaston.  The weapon was successfully tested at the Montebelow Islands near Australian in 1952.

Located in a secure guarded compound at the heart of the site, Air Vice-Marshal Davis, in charge of security, issued orders that none but Ministers of the Crown were to be allowed inside. Other Ordnance Factory staff were to be told, simply, "We're doing a job which is a bit tricky, so in the interests of safety these buildings are out-of-bounds".
John Challens, who designed the firing circuits for the 32 detonators to initiate the explosive sphere around "Hurricane"'s plutonium core, died in March 2002. Testing at Shoeburyness was completed at the last minute before the Monte Bello nuclear test. Challens' genius achieved the required simultaneous detonation accurate to millionths of a second.
A part of the Royal Arsenal West (below) where they made the Atomic Bomb lasted until 2004 and was demolished in 2009 for an extension to Belmarsh prison.  Security was seriously tight right up until the end.  A friend went to have a look after closure and as he stood at the fence in Hadden Road he was watched by three security guards who wouldn't say a word. There were signs saying "photography and sketching is forbidden"
Sir William Penney's plan, entitled Plutonium Weapon - General Description is available on this link. It is complete with Penney's written report, and his diagrams of the planned weapon

In June 1947 Sir William Penney began assembling a team to work on the bomb. One of his first steps was to prepare a document describing the features of the U.S. implosion bomb, breaking down the development tasks required to replicate it, and identifying outstanding questions that required further research. This report was completed on 1 July, was entitled Plutonium Weapon - General Description (UK Public Record Office File AVIA 65/1163, "Implosion") and gave the British atomic weapons program a preliminary design description.

The project was also code named Basic High Explosive Research or BHER (later just HER) and was based at Woolwich Arsenal. Unlike the U.S. atomic bomb project which had been centrally located at the custom built facility of Los Alamos, BHER drew on existing groups scattered over several sites. In addition to Woolwich, Armament Research Department (ARD) at Fort Halstead and other sites were involved. Furthermore not all aspects of bomb development resided with BHER. Although BHER was responsible for the overall weapon design, and the development and fabrication of the implosion system, the manufacture of the plutonium core initially resided with the plutonium production program under Hinton. See here for more details
Operation Hurricane 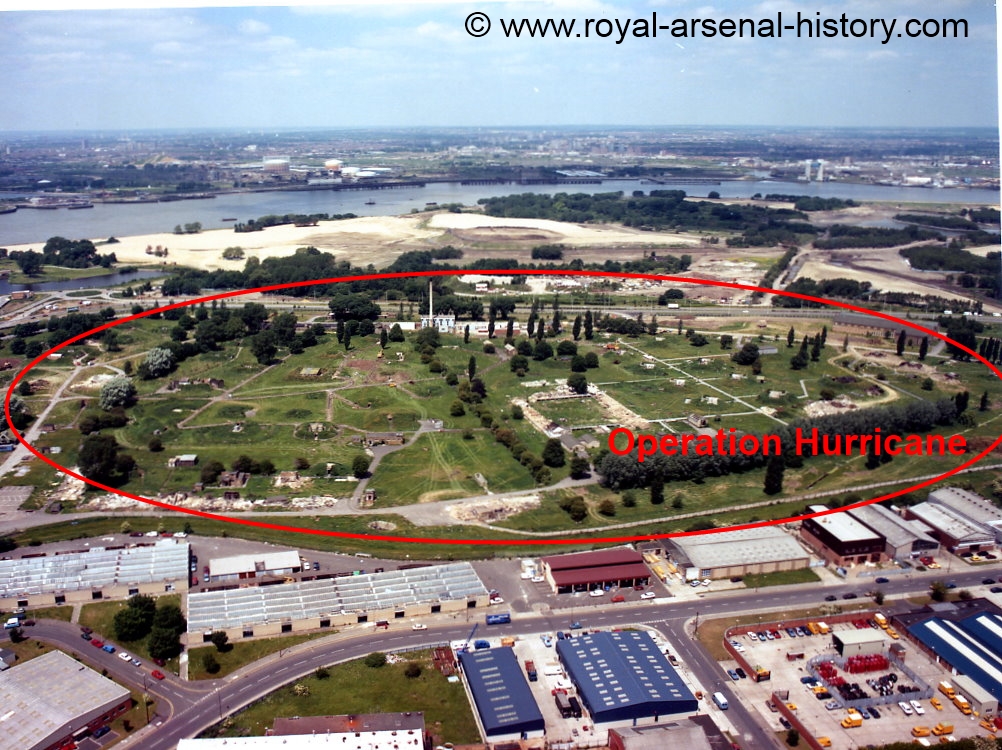 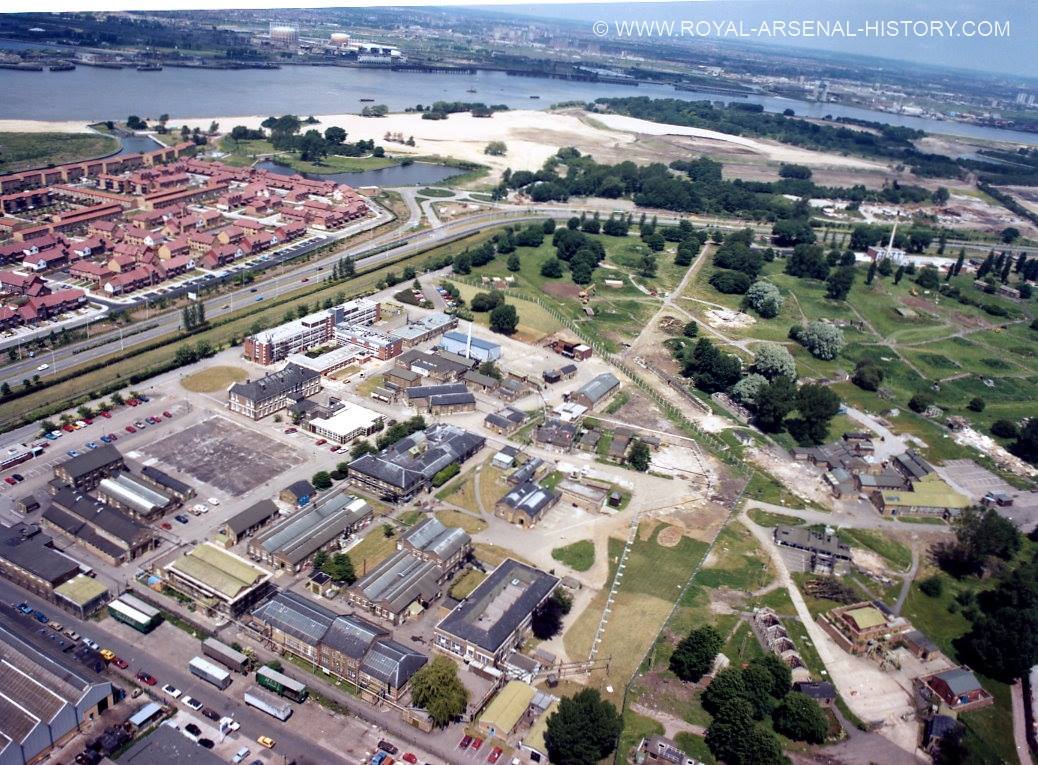 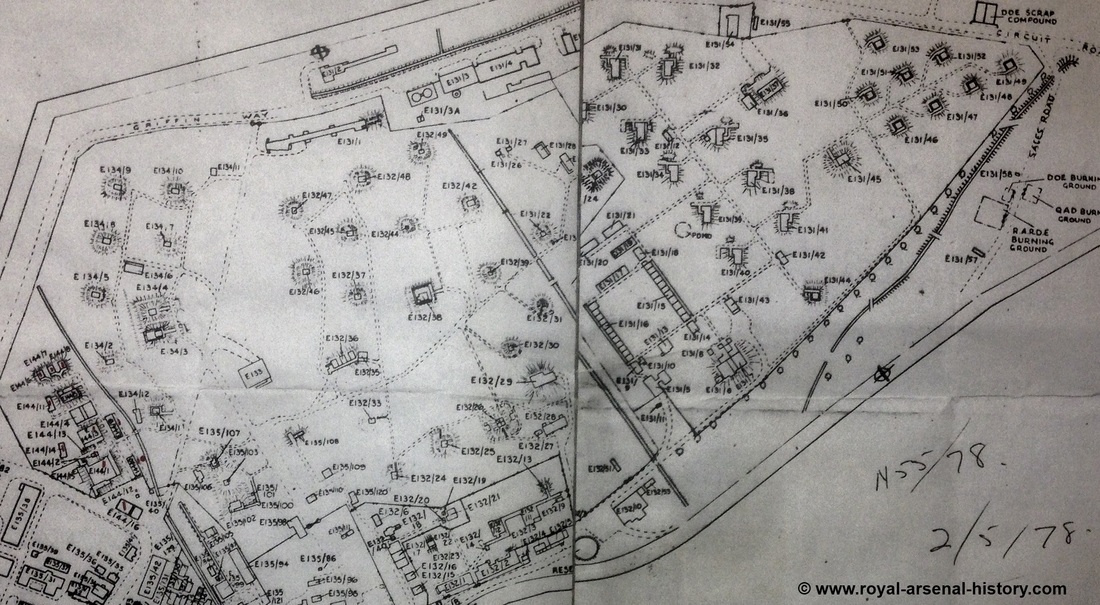 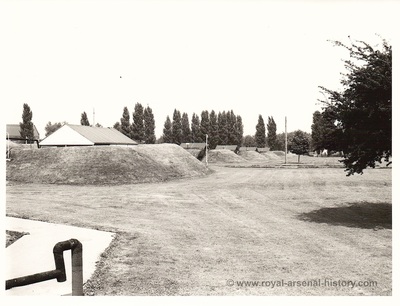 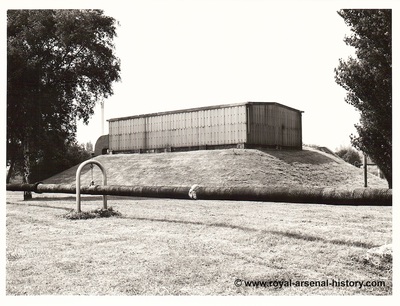 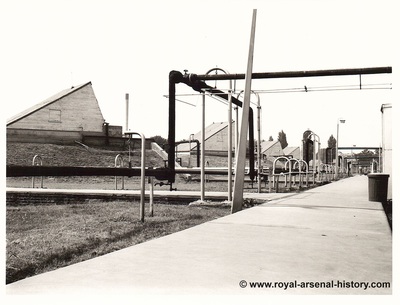 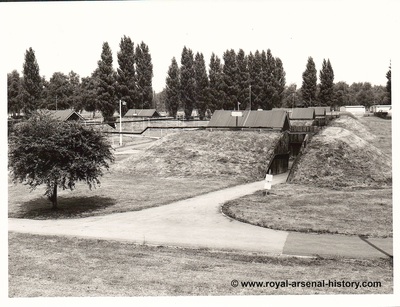 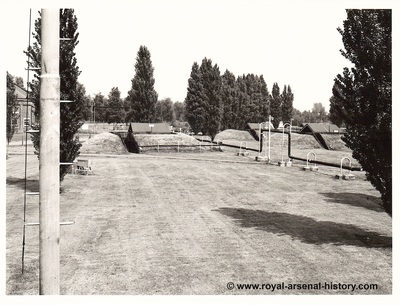 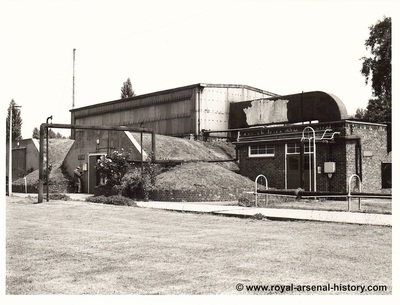 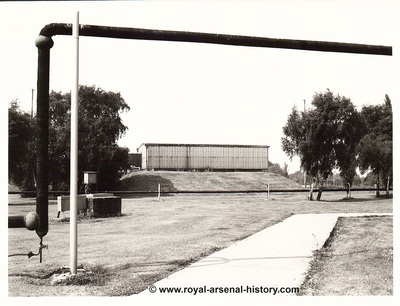 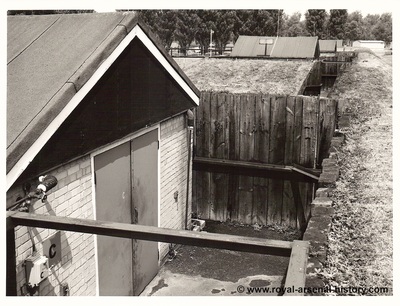 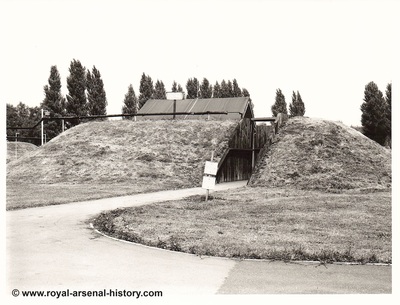 I also believe some of the buildings used in the Royal Arsenal East for the Atomic bomb program where possibly related to "Danger Building area E" below. The reason being is the area closed down in 1919, it was used again in 1947/50 (The Project hurricane dates).  I have no evidence of this, but this area is still there today. Why untouched over 60 years later? The proposed river crossing perhaps.  Please leave comments below to discuss further. 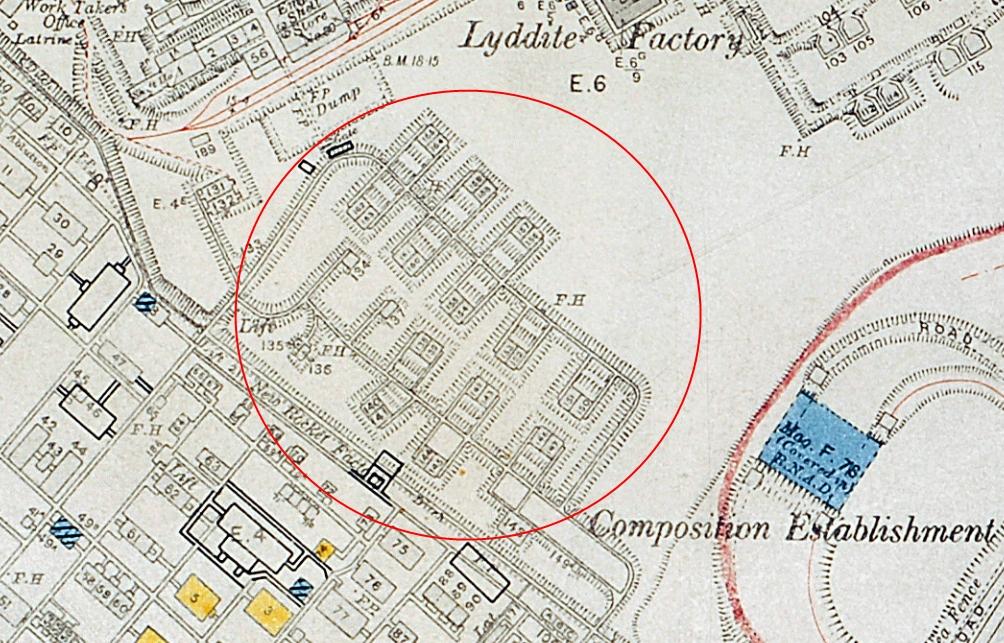 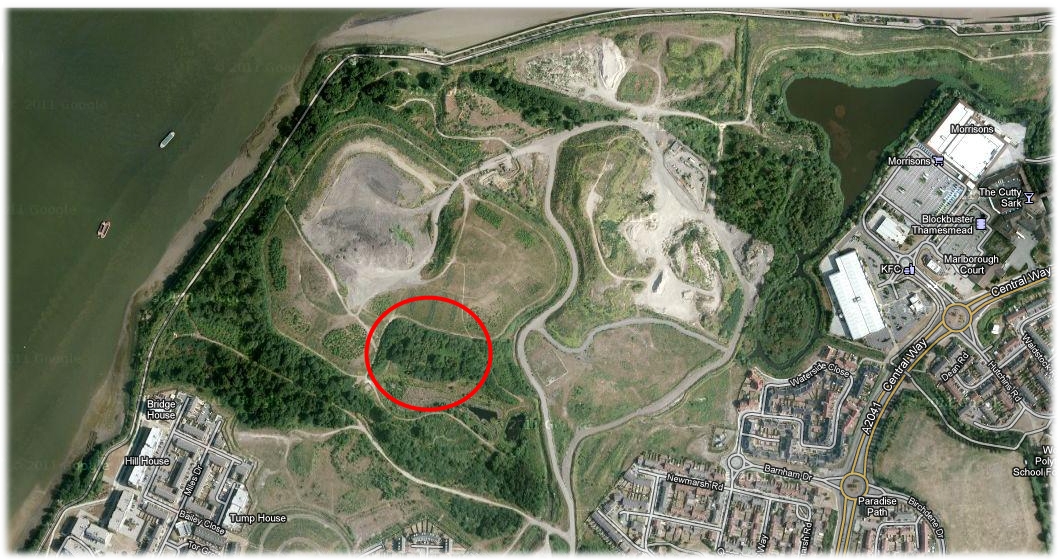 ​
The torpedoes were made at Woolwich until 1910 (by the Royal Gun Factory after 1890), when manufacture moved to Greenock. The first above-water launching was made when the Navy slid a 14" torpedo off a mess-table and through a porthole. The later cradle used by HMS Thunderer on the left does not seem a great improvement. Powered by compressed air driving contra-rotating propellers, the early Woolwich torpedoes had a range of up to 800 yards.

The first ship to be sunk by a torpedo was the Blanco Encalada in 1891 during the Chilean revolutionary war. Hit by a single torpedo, she sank immediately. The captain, Don Luis Goni, was ejected up a ventilation shaft and into the sea by the explosion, and was last seen swimming ashore with his arm around the ship's mascot, a Llama. The creature was taken onboard HMS Warspite as a mascot, until, having eaten the epaulettes off an Admiral's dress uniform, it was banished to London Zoo in disgrace.

Hyder Ali and his son, Tipu Sultan, gave Colonel Wellesley an unpleasant surprise during the siege of Seringapatam in 1799; they fired rockets at him. The Indian rockets (one of which survives in Firepower's collection) were sophisticated, and in advance of anything Britain had at that time. It is believed that Colonel Congreve worked from a captured example at the Arsenal in developing the Congreve Rocket. It was, essentially, a black powder charge in a round soft-iron case on the end of a long stick.


The rocket, for land or sea service use, was often as dangerous to fire as to manufacture. The gunpowder had to be tightly compressed in the tube for the weapon to be effective; the Arsenal's rocket factory was therefore sited in isolation on the eastern side of the canal. Congreve's first large rockets at Woolwich, from 1805, achieved a range of 2,000 yards, and soon the Arsenal was making 32lbr rockets with a 3,000 yard range. Had they been accurate, they would have been deadly.

Test site, Montebello Island, West Australia, 1952, Max. yield, 25 kilotonnes of TNT (100 TJ)
More information here on project Hurricane
​The scientists were not the only ones to witness the nuclear tests around Australia. In order to test military clothing and equipment, sailors and marines were exposed to the flash. Many of them were national servicemen in their teens or early twenties. One recalls
We knew it was going to be an explosion. We were never told it was an atom bomb though it had come through the grapevine. They started the countdown and there was this flash and I could see right through my hands, the bones in them, it was like an x-ray of my hands, even though my eyes were shut. Then there was more like a roar, a rumble than a bang. And then we turned round and opened our eyes and just after there was this hot wind and you could feel it like grit hitting your body. The ship rocked slightly. And that was it.


The Nuclear Test Veterans claim abnormally high rates of cancers and ill-health as a result of their exposure, and an independent study by the University of Dundee Medical School supports this. However, this is disputed by the Government, which relies on a study carried out by the National Radiological Protection Board that suggests such illnesses are not attributable to exposure to nuclear testing.