Known as prison ships or “prison hulks”, these decomissioned vessels were used by Britain during the 18th and 19th centuries to house prisoners of war and those awaiting transportation to penal colonies. Rife with death, disease and despair, prison ships reflect a less-than-proud corner of Britain’s impressive maritime history. Moreover, some converted hulks were among the Royal Navy’s most celebrated vessels. The use of the hulks was seen as a temporary measure, and so was first authorized by Parliament for only two years. But despite the concerns of some members who deplored its inhumanity, the 1776 Act lasted for 80 years. It was regularly renewed and extended in scope 'for the more severe and effectual punishment of atrocious and daring offenders'.

The first hulks were moored on the Thames off Woolwich and the opposite shore. In the 18th century there were marshes along the north shore and few people lived there. On the southern shore, the Woolwich Warren was a maze of workshops, warehouses, wood-yards, barracks, foundries and firing ranges.

Convicts were put to work at the Woolwich Arsenal. Transporting convicts to America had cost the Crown little. But housing convicts on the hulks was expensive, even though the clothing, food and accommodation were of the lowest quality. To cover the cost, the convicts were put to work improving the river. By about 1775 it was clear that the Thames' main channel was drifting toward the centre of the river. Major dredging needed to be done to stop the movement.

Convict labour was also needed for the development of the Arsenal and the nearby docks. The men dug canals and built the walls around the Arsenal. Other convicts were put to work driving in posts to protect the riverbanks from erosion.

The convicts worked long hours on the banks of the Thames and at the dockyards at Woolwich: 10 hours during summer, 7 in the winter.

In July 1777 a correspondent from Scots Magazine gave an account of the employment and treatment of the convicts employed in ballast-heaving:

There are upwards of two hundred of them who are employed as follows: Some are sent about a mile below Woolwich in lighters to raise ballast, and to row it back to the embankment at Woolwich Warren, close to the end of the Target Walk: others are there employed in throwing it from the lighters.

Some wheel it to different parts to be sifted: others wheel it from the Skreen, and spread it from the embankment.

A party is continually busied in turning round a machine for driving piles [posts] to secure the embankment from the rapidity of the tides.

Carpenters are employed in repairing the Justitia and Censor hulks, that lie hard by for the nightly reception of those objects, who have fetters on each leg, with a chain between, that ties variously, some round their middle, others upright to the throat. Some are chained two and two; and others, whose crimes have been enormous, with heavy fetters. Six or seven are continually walking about with them with drawn cutlasses, to prevent their escape and likewise prevent idleness.

The prisoners were chained up at night.

Manacles were used on board prison hulks, Royal Navy vessels and merchantmen to restrain prisoners and crew members. This particular forged steel set, with a screw fastening mechanism

A day in the life.

James Hardy Vaux was a prisoner on the Retribution, an old Spanish vessel, at Woolwich during the early 1800s.

While waiting to be transported for a second time to New South Wales, he recalled:

Every morning, at seven o'clock, all the convicts capable of work, or, in fact, all who are capable of getting into the boats, are taken ashore to the Warren, in which the Royal Arsenal and other public buildings are situated, and there employed at various kinds of labour; some of them very fatiguing; and while so employed, each gang of sixteen or twenty men is watched and directed by a fellow called a guard.

These guards are commonly of the lowest class of human beings; wretches devoid of feeling; ignorant in the extreme, brutal by nature, and rendered tyrannical and cruel by the consciousness of the power they posses..

Life on board - Appalling conditions

Conditions on board the floating gaols were appalling. The standards of hygiene were so poor that disease spread quickly. The sick were given little medical attention and were not separated from the healthy. Two months after the first convicts had been placed on board the hulks, an epidemic of gaol fever (a form of typhus spread by vermin) spread among them. It persisted on and off for more than three years.

Dysentery, caused by drinking brackish water, was also widespread. At first, patients, whatever their state of health, lay on the bare floor.  Later they were given straw mattresses and their irons were removed.

During the first 20 years of their establishment (1776 - 1796), the hulks received around 8000 convicts. Almost one in four of these died on board. Hulk fever, a form of typhus that flourished in dirty, crowded conditions, was rife, as was pulmonary tuberculosis. Most of the deaths on board were caused by neglect. With adequate medical care thousands of lives could have been saved.

Convict ward on the prison hulk Warrior (1781). Mortality rates of around 30% were quite common. Between 1776 and 1795, nearly 2000 out of almost 6000 convicts serving their sentence on board the hulks died. Many of the convicts sent to New South Wales in the early years were already disease ridden when they left the hulks. As a result, there were serious typhoid and cholera epidemics on many of the vessels heading for Australia

The living quarters were very bad. The hulks were cramped and the prisoners slept in fetters. The prisoners had to live on one deck that was barely high enough to let a man stand up. The officers lived in cabins in the stern.

Attempts by any prisoners to file away or knock off the chains around their waists and ankles led to frequent floggings, extra irons and solitary confinement in tiny cells with names like the 'Black Hole'.  Floggings with a cat o'nine tails were a common occurrence on board the hulks.

Food on the hulks

The authorities were always keen to keep down the cost of the prisons. They wanted to avoid giving prisoners a better life than the poor had outside the hulks.

The quality of the prisoners' food was therefore kept as low as possible. The monotonous daily meals consisted chiefly of:


The biscuits were often mouldy and green on both sides! On two days a week the meat was replaced by oatmeal and cheese. Each prisoner had two pints of beer four days a week, and badly filtered water, drawn from the river, on the others.

Sometimes, the captain of a hulk would allow the convicts to plant vegetables in plots near the Arsenal. This attempt to add something extra to the poor diet of the prisoners depended on the goodwill, or otherwise, of the individual in charge

Where was the Warrior Prison ship located?

From the location described and the coincidence of this name given by developers as "Warrior Close" I believe it was just about here but may be wrong. 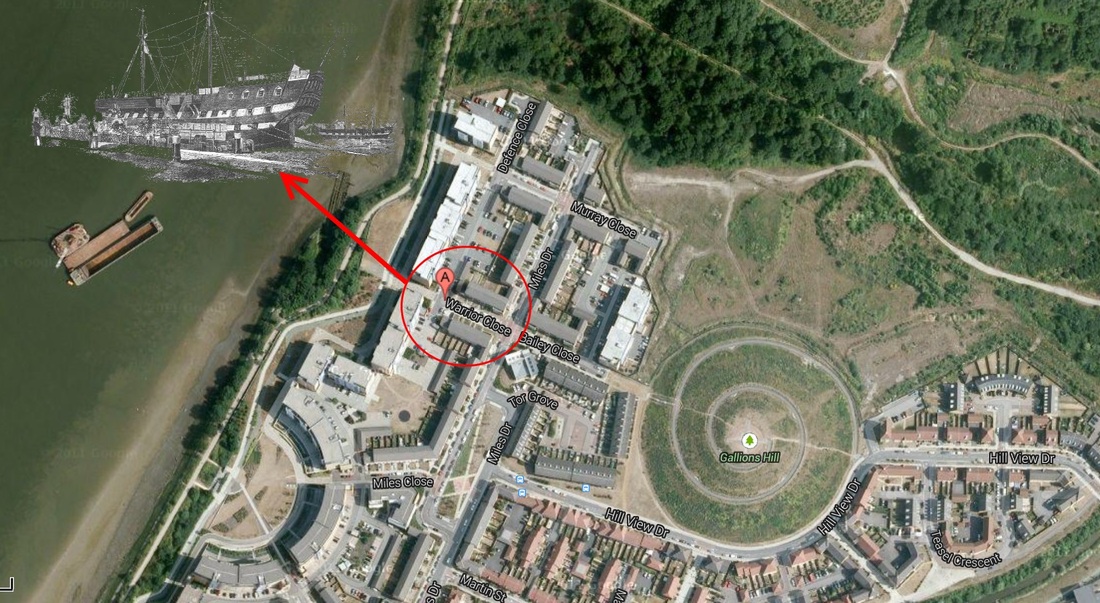 From 1776 until around 1817, the convicts were buried in unmarked graves inside the Warren. Great quantities of human bone were unearthed when the new gun factories were built in the late 1850s. Col Pilkington RE had complained to the War Office before 1817 about the "noxious and distressing" practice of burying convicts in ground that was already full to overflowing. It has been suggested that after 1817 burials took place on the north side of the river, however, this is unlikely. Pilkington investigated the possibility, but the Arsenal's holding of 13 acres on the north bank, used for grazing the Artillery's horses, was sold at auction soon after. It is more likely that the burial site moved to the far end of the Arsenal's land on the south bank, where it continued until the closure of the hulks in 1856. The following contemporary account is taken from "The criminal prisons of London" (Mayhew / Binney):- 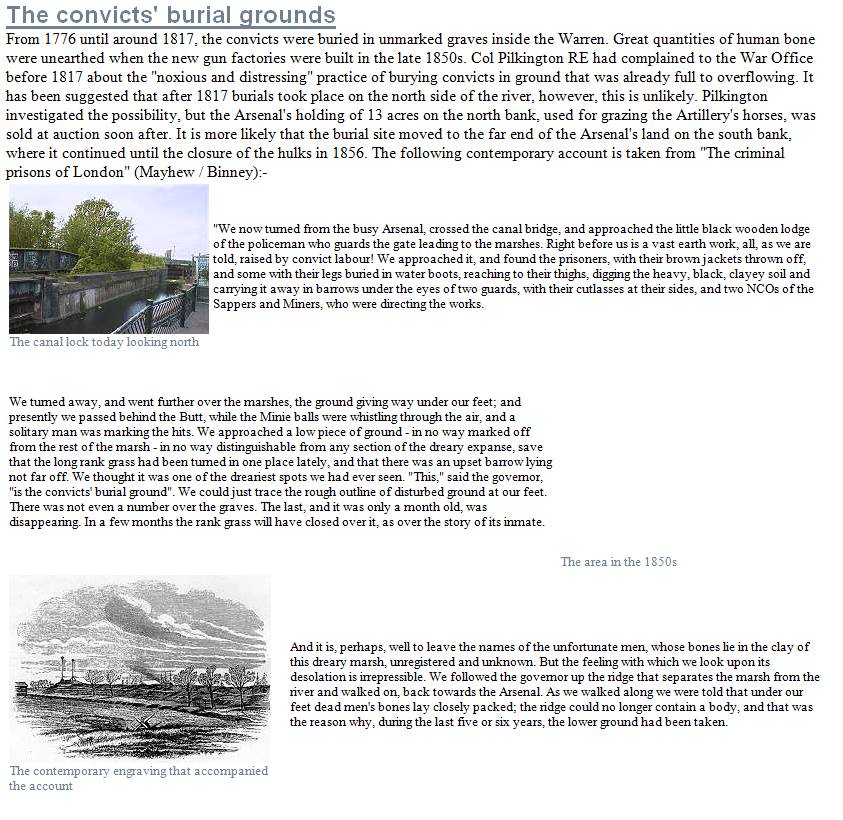 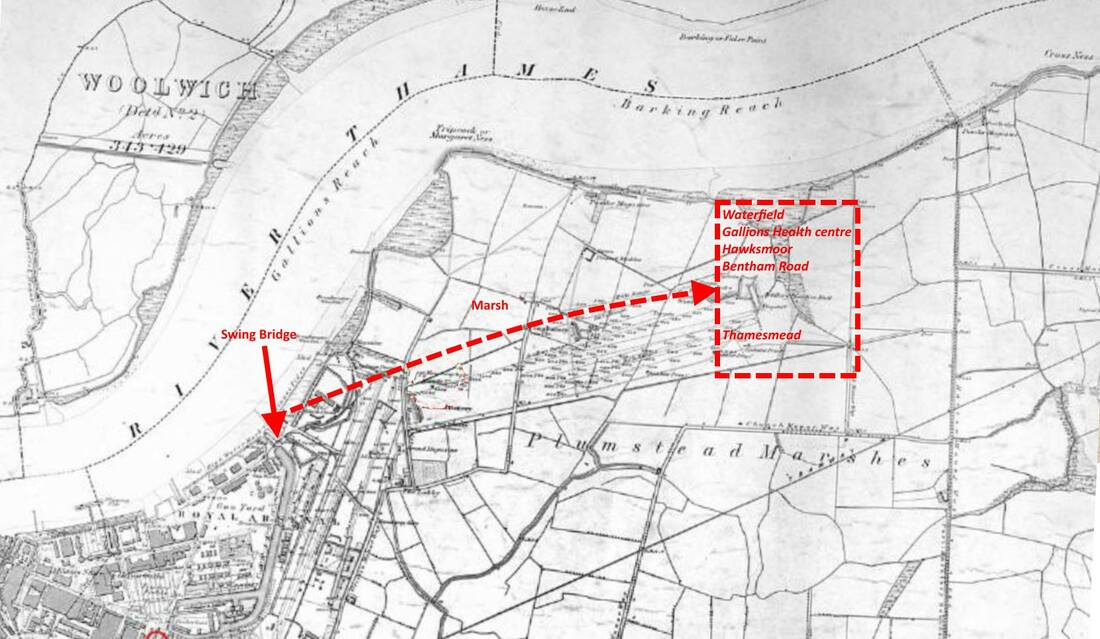 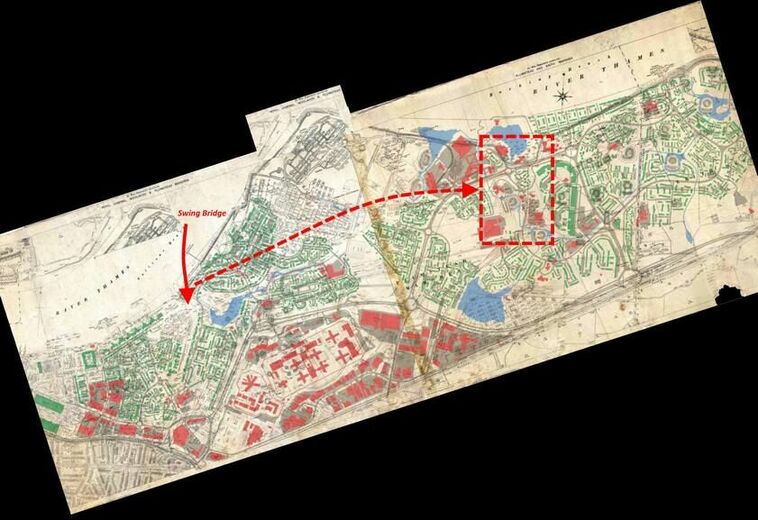 Tales from the Woolwich Hulks

The first account is from "Old Convict Days" by William Derricourt. The second, by Roger Hancox, is reprinted from The Midland Ancestor